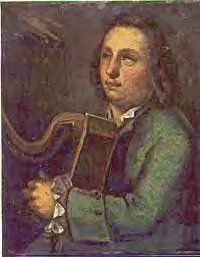 In National Galary of Ireland
Carolan's Portrait painted from life.

"Of all the bards this country has ever produced, the last and the greatest was Carolan the blind. He was at once a poet, a musician, a composer, and sang his own verses to his harp."... Oliver Goldsmith as found in Ó Máille p. 39.

Turlough O'Carolan (1670 - 1738) earned his living by composing and playing songs for his patrons. He is said to have composed the tunes by fingering the buttons on his coat while traveling on horseback to a patron's home. He would compose the melody first and then the lyrics. Hardiman says that Carolan's portrait above was painted by Dutch artist Johann Van der Hagen. It is unlikely that this is so because the harp is out of perspective and a Dutch master would not have allowed this flaw. It was probably painted by Mr. Francis Bindon of Doonaass in County Clare as suggested by Myles John O'Reilly.
Carolan's Tunes as numbered and published by Donal O'Sullivan
Non-O'Sullivan set of Carolan Tunes
Thanks to Mike Lydiat, Sheffield, South Yorkshire, UK. for midis
http://www.docsworkshop.force9.co.uk/music.htm

Mouseover any hot link to view sequencer's name.
Thanks to Chris Gilb for permission to use a number of midis and notations with credit given.
The Poems of Carolan Amhráin Chearbhalláin by Tómas Ó Máille Irish Text Society,1916.
O'Sullivan's 1927 et seq. 2 vol editions of Bunting's 1796-1840 publications, (Originally published in Journal of the Irish Folk Song Society)
Neither Edward Bunting nor Donal O'Sullivan had their works copywrited.
Portrait: Frontispiece Op. cit. O'Sullivan vol 1.
The Complete Works of O'Carolan: Irish Harper & Composer (1670-1738) published by Ossian Publications, Ireland in 1984 ISBN 0 946005 16 8
Captain O'Neill was recently discovered and added by Ossian to their latest edition.