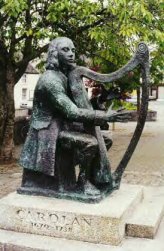 "Of all the bards this country ever produced, the last and the greatest was Carolan the Blind. He was at once a poet, a musician, a composer, and sung his own verses to his harp."... Oliver Goldsmith. This street sculpture has stood in Mohill, Co. Leitrim since 1986. A brief biography follows at the foot of the page.

+ Eipeasóid an Saic - The Sacking of Charles MacCabe

Courtesy of Vivian & Jack, IrishPage.com 2022
Sear abhaile: Back to homepage