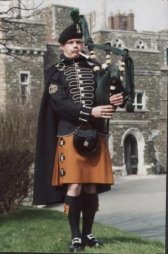 This song was probably sung to tease the young woman who'd been noticed to cast her eyes on the piper more than once during the evening. The girl's father tells her to marry the piper and they argue back and forth. The girl holds her own until the end of the night. Obviously, she has better taste than that and argues him down. This little traditional song appears in Clannad's second album, Clannad 2.

Put your mouse arrow on an the Irish word
to pop-up its translation and phonetics.

Courtesy of Vivian and Jack Hennessey, IrishPage.com April, 2008
'riú is an interjection meaning however
There is no music available for this song
So our substitution is Kerry Dances.
This little song is written in the Munster dialect.
Translation into English by David Manning and Éamonn Ó Dónaill.