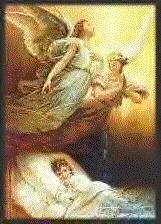 An Irish Lullaby
This lullaby is one of the oldest extant Irish songs, lulling a child to sleep with a prayer for safety against the wild weather and "Clan Eoin's wild Banshee." The song, Castle Of Dromore is sometimes called October Winds. There are at least four castles named Castle of Dromore or Dromore Castle in the counties Down, Kerry, Limerick and Tyrone. Several discussions on the Internet are dedicated to pinpoint the geographical location of the lullaby Castle of Dromore without decisive outcome. Without solid proof Dromore Castle, in County Tyrone is taking the lead. Clan Owen in the second verse refers to the descendants of Eoghan, anglicised in Owen. This clan once possessed the counties Tyrone, or Tir Eoghan, and Derry and parts of County Donegal. The presence of a black water in County Tyrone is circumstantial evidence as there are dozens of black waters on Ireland. The banshee point towards a fairy-like vicious woman originating from or serving Clan Owen (perhaps some sort of clan ghost).

Broadband users should click on speaker
to hear the lyrics when music stops:

The words of the song were written by Sir Harold Boulton to a traditional tune, My Wife is Sick. The Irish Gaelic words are a translation into Irish of Boulton's lyric, made by Douglas Hyde. Subsequently a good few people have assumed (having not read the book in which the song was published in 1892) that the Irish words must be older, and a rumour has long circulated that they are 18th century, which would have surprised Hyde! The Irish lyrics are from Songs of the Four Nations, 2nd ed., edited by Harold Boulton (J.B. Cramer, 1892, 215-220; with music.)

Courtesy of Jack & Vivian, IrishPage.com October 2021
According to a newsgroup post Castle Dromore
is the castle in the movie, High Spirits
* The Irish words A pháiste gheal a stór mean My loving treasure store
The Castle of Dromore is sung by Matt Connolly
Replay background music: Dromore.mid