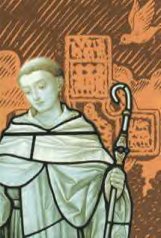 St Colmcille of Ireland
On the 1400th anniversary of St Colmcille's death, President of Ireland, Mary Robinson retraced the saint's journey from Donegal to Derry to the Isle of Iona. Ending her pilgrimage on the Isle of Skye on his feast day, 9th June, 1997, she gave a lecture beginning with the following poem written by Colmcille himself over 1400 years before.


Historical Note: Columcille (521-597 A.D.) is also known as Columba, which is the version of his name that most English speakers use. Columba, in Latin, means "dove." Colum Cill means "dove of the church." Columcille is the nickname that the Irish gave him, and call him by. He was forced to leave Ireland because of his reproducing a book in the scriptorium without permission. An Irish Celtic Monastic, he brought twelve monks with him, and founded the monastery on the island of Iona, off the coast of Scotland, where the book of Kells was written and he was the Irish Missionary Monk who led the Picts (Northern Scots) to Christ. There is an old rhyme that goes: "In County Down, three saints one grave do fill: Patrick, Brigid and Colmcille."

Rhyming Text: When Mary Robinson ended her pilgrimage on the Isle of Skye she began her talk with words attributed to St Colmcille himself in the rhyming version by Ulster poet, John Montague. The words she spoke are below and differ from the original above due to the fact that they rhyme, and are as follows:

Filleadh Abhaile
Back to Poem Page