An Raibh Tú ag an gCarraig? - Were You at the Rock? 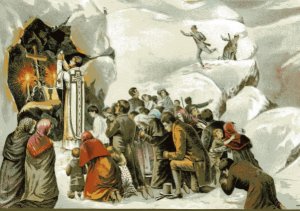 This song speaks of Penal Days when the Mass was celebrated in secret at remote gatherings. The "Carraig" was the "Mass rock" used as a meeting-place and altar. According to native Irish "sean nos" singers, the words appear as a love song, "Were you at the Rock and did you see my Valentine?" (meaning either the priest or the Host). However, it was a code addressed to a disguised priest or congregant, so the enemy would not grasp the true meaning even if he spoke Irish. Death was the penalty for those caught at Mass. In Penal Times, a price of 30 pounds was offered for the head of a priest or hedge-school master, the same as for that of a wolf.


At first glance, "An Raibh Tú ag an gCarraig" appears to be a series of questions and answers about a young woman, but in reality it contains a coded message. A traditional air from the 1796 collection of "Ancient Irish Music" of Edward Bunting. The coded message is uncoded below.