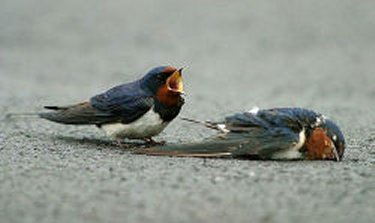 This is an old Irish poem called "It Is Sadly the Blackbird Calls." Its author is anonymous and it was probably written in the 1100's with parts of original translation by David Greene and Frank O'Connor. Blackbird is the common name in North America of a perching bird allied to the bobolink, the meadow lark, the oriole, and the grackle. The European blackbird is a thrush. While black predominates, bright reds and yellows are conspicuous on several species. This poem compares the plight of the blackbird to the plight of the Irish. 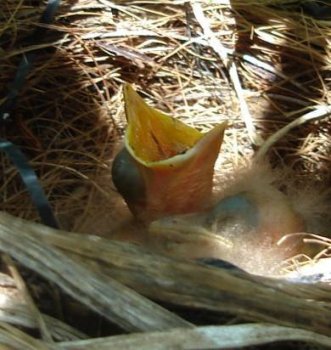 To our left is a fledgling blackbird in the nest.

The European Blackbirds build cup-shaped nests, sometimes lining them with mud. The mother lays two to five speckled eggs that she incubates. Sometimes she lays two or more clutches per year. Both parents help in raising and feeding the young.

The songs of some species, including members of the genera Catharus, Myadestes, and Turdus, are considered to be among the most beautiful in the avian world, heard at dawn, dusk, and after a rain shower. The female builds the nest in a conifer at the base of a branch against the trunk, usually 5-15 feet off the ground. The nest is a bulky, open cup made of twigs, moss, leaves, and pieces of bark, lined with soft grass and rootlets. The female lays 2-5 eggs that she incubates. Both parents feed the young.

These birds grow very tame and even after they have left home, tend to come back for a visit.

While some large birds like the eagle or parrot can live 30 to 80 years, the little guys such as wrens, blackbirds etc. usually have lifespans of 7-8 years. Some individual birds have survived surprisingly long, including a cardinal (13.5 years), One red-bellied woodpecker survived in the wild for 20.5 years! Captive birds, protected from the hazards of nature, have much longer life spans.

This is a poem for which there is no music.
Replay background music: a Lament