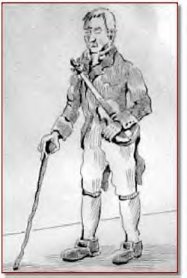 Impression of the poet, Anthony Raftery,
executed by Donal MacPolin.

Raftery was born in Killedan in 1779 or 1784, the son of a weaver. He was blinded by small pox while very young and is said to have worked as a stable boy for the landlord, Frank Taaffe. This Raftery poem is a famous one. In fact it was written on the backside of the Irish 5 Punt note. He was a wandering musician with a fiddle and like so many vagrant musicians of the time (c. 1784 - 1835 ) he was blind. They taught the blind to play an instrument so that they would at least be able to earn some sort of a living despite their handicap. The poem is so full of human kindness and warmth. *

"I think it is delightful. Reminds me of Mozart's 'Eine Kleine Nacht Musik'of which it was said that 'It's so simple a child could play it ... but a master couldn't do it justice. Of course an old blind man would prop himself against a wall for support whilst he was playing It's as nice a word picture as you could ask for. I heard an old fella saying one time, "Ní raibh Rafturaí dall ach bhí se caoch... "(Rafturai wasn't blind but he was poor sighted). He even managed to get married and had a few kids" ... Caoimhghin Ó Brolchain of Devon, England.